Where the iPad should go next: Look toward Windows 10 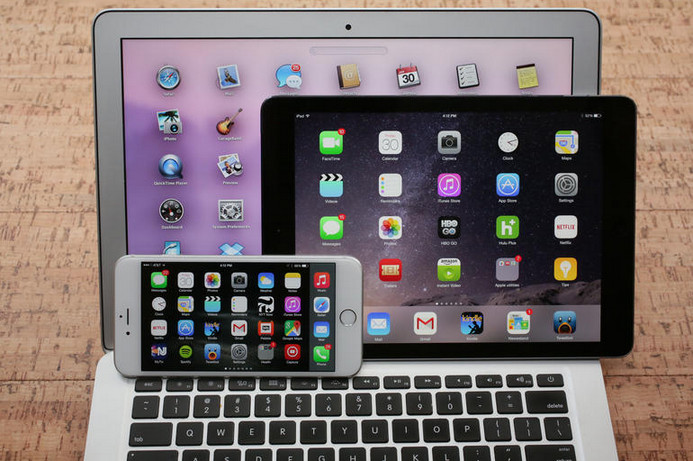 Where can the iPad go from here? Microsoft has been coming up with some pretty good ideas.

The iPad is nearly 5 years old. That product, ever since, has continued to ride a thin dividing line between iPhones and Macs: mobile, and computers.

Apple’s world has since become all about the iPhone. Look at the latest sales numbers, and they’re shockingly lopsided: iPhones now represent almost three-quarters of Apple’s revenue. Macs and iPads, while still selling in numbers that would cause celebrations at other companies, just don’t seem to have the same fire. Sales of iPads, in fact, are trending downward.

But 2015 seems to offer the promise of new things in the world of both product lines: the two biggest rumors predict a “big screen” iPad, and a new “small screen” MacBook Air. The irony? Both of these products are said to include a screen in the 12.5-inch realm.

Will there be both a 12-inch iPad and a 12-inch MacBook Air in 2015? If so, how will they co-exist? Could they be meant for different customers?

If these rumors are real, shouldn’t this be just one product? Maybe a thin and light touchscreen tablet, with a detachable keyboard? And maybe — just maybe — running an operating system that combines the best of Mac OS X and iOS?

For me, the answer lies with Microsoft.

I’ve always wanted the iPad to be more of a full computer, or at least have the ability to go there. Like the Surface already does. Some might say that’s pointless, that the iPad can already be a productive device with tons of dedicated apps and accessories. I still say, why must there be a dividing line between OS X and iOS at all? Look at Windows 10. Look at everything that Microsoft is laying out now, after years of chaotic evolution.

Maybe that sounds like an Apple-ized version of Microsoft’s Surface Pro tablet. And maybe if you’re an Apple fan, that’s sacrilege. But the iPad needs a change. It needs something to ignite interest. It needs a few new ideas.

Microsoft — with its hardware, and with its upcoming Windows 10 operating system — is actually blazing a bold trail. One that Apple may actually be able to learn from.

What Microsoft is getting right: One world, multiple devices

Windows 8 took a first crack at cross-device one-size-fits-all computing for a variety of types of tablets, laptops and all-in-one PCs, and failed. The experience wasn’t fun for a lot of people, and it turned out that some types of hybrid PCs were better suited to Windows 8 than others.

Windows 10 looks like it’s made all the right improvements, and explores cross-device computing in a way that feels very Google. Universal apps promise to run on phones, tablets, PCs and maybe even the Xbox One. In practice we’ll see how that goes, but in theory it sounds wonderful.

Google’s apps like YouTube, Gmail, Drive and Docs take everything to the next level of true connectivity and I can use Google Drive on any device. It generally works well, no matter where I am. Isn’t that the works-anywhere philosophy brought to life? Microsoft’s apps, especially OneDrive, take a similar approach.

Apple hasn’t been sitting still in this regard. In fact, iOS and OS X have gotten a lot closer, and core apps work are coming together in a similar way; iWork, iLife, iCloud Drive, Mac-to-PC syncing of common calendars, addresses, FaceTime calls, text and iMessages, notes, photos and a lot more are already possible. They’re already like universal apps within Apple’s product universe.

But Macs still stand apart from iPhones and iPads. I can’t, no matter how hard I try, truly turn my iPad into something that I can use for serious work like my MacBook. And, even though Apple’s App Store has tons of great apps that work across iPhones and iPads, none of them will work on a Mac, or vice versa, which can get frustrating if you’ve invested in a large amount of productivity software. (Apple’s free iWork and iLife software, much like Microsoft’s Office suite, sweeten the deal somewhat, and the apps sync files across Macs and iOS devices pretty well.)

The difference still lies in core software and interface differences. iOS just isn’t as flexible as OS X. I can’t adjust my desktop, or expand my working area beyond the full-screen layout that each separate app offers.

Microsoft Windows 10’s Continuum has another solution: it promises to swap seamlessly between touchscreen tablet and keyboard-connected modes, with software that smartly recognizes when keyboard peripherals are attached. It promises to switch between an app-based tablet, or a more traditional computer desktop — intelligently.

Apple already has the similarly-named Continuity, which focuses on seamlessly handing off between iOS devices and Macs, but a future iPad could adopt a similar idea for different keyboarded modes of computing, too. Or, future Macs could evolve a touchscreen layer to allow for iOS apps.

iPad, it’s time to flex out and try new things

Apple’s current computers have become locked into a certain design: the laptops (the MacBook Air has had the same look for years), the iMacs (design changes but the same all-in-one concept since 2006), and the Mac Mini. (The Mac Pro, the one major new-looking product, is so specialized it that it’s not a prominent part of Apple’s current collection.) So, too, have iPads. If you went back in time to early 2010 when the iPad was first sold, Macs really didn’t look all that much different from the outside.

iPads have been a stable product, and in many ways it’s been helpful to iPad owners that the changes have been so subtle: old iPads last a long time, and there aren’t many clear-cut reasons to upgrade. You can, for instance, still upgrade a 2011 iPad 2 to the current version of iOS (though not all of the latest games or apps will run on it).

But it’s Apple’s conservative path with the iPad that’s caused the public to become bored with it.

I identify with that ennui. I want change. I want an iPad-with-keyboard that becomes essentially a full PC, and I’ve wanted one for years. And yet, I still use my laptop.

I rely on my laptop because it works, and it has a keyboard and trackpad I can trust, and it can download and store what I need, and I can edit the files on it flexibly. These things could all be possible on gadgets like tablets and phones, with the right software and input accessories. Right now, it isn’t.

The things I carry on me all the time are my phone, and maybe (but decreasingly) a tablet. Turning these into full-fledged computers, to do all the things I need to do and never worry about running to my laptop, is more possible than ever before. We’re closer than we ever were before smartphones. The future begs for these devices to start using common inputs, keyboards, touch pads, even screens. A phone, a tablet, a laptop, whatever: I should be able to start typing on a keyboard and work on any of them. If I could link up to a monitor and start typing on a wireless keyboard, even my phone could be a PC. It might do a lot of what I need.

For the iPad, it means making a killer set of inputs — keyboard, trackpad, super-accurate stylus, or something else — in order to make working on it feel somehow better than on a laptop. Right now, it just isn’t quite there.

In search of one new, bold type of input

For the iPad, the moment of evolution is now. A new interface, improved software, and a new accessories like a more integrated keyboard and support for a pen. Sounds like a Surface tablet. Well, yes, the Surface is a great idea.

I want that next step.

Microsoft, with its Windows 10 operating system, continues to explore ways to fuse everything into one across-the-board strategy. A lot of it’s been a hot Darwinian mess, but some great products are emerging: some affordable ones, too. And Microsoft is proving that the tablet-meets-computer can really work, and even be awesome.

While iOS and OS X may never truly merge, it’s time for iOS and OS X devices to become even more intertwined. And it’s time for a few new product ideas, too. I love the consistency of Apple’s cornerstone products, but there has to be change. Forms can’t stay the same forever. The very nature of what it means to be a computer is atomizing and fragmenting as we speak. The iPhone’s success — Apple’s fastest-evolving product — shows why: we’re ready for change. The iPad, now one of the most conservative devices in Apple’s catalogue, needs to be part of it. Microsoft is pushing the envelope on tablets. And it’s time for Apple to move there, too.

Recommend: If you would like to transfer/backup files from iPad to your computer, you can try this perfect one click data transfer tool, migrate everything, including SMS, Contacts, Videos, Photos, Call logs and more from phone to phone. Simply download and have a try.