What Is iPhone Error 53 and What Can You Do About It? 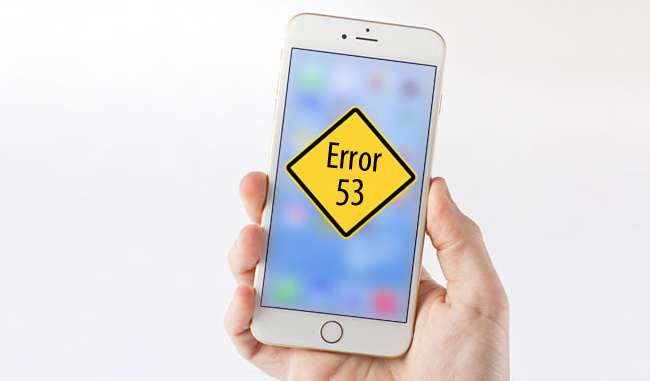 A somewhat obscure problem, iPhone error 53, is leaving some iPhone owners with phones that don’t work at all. Given that it’s not widely known and can have drastic consequences, it’s important to understand what error 53 is, what causes it, and how you can avoid it.

Who Is At Risk?

According to most reports, error 53 strikes people who:

In theory, the error could also affect iPhone 5S and iPhone 6S and 6S Plus, but I haven’t seen reports of that.

Apple’s page that explains iPhone and iTunes error codes lumps 53 in with a couple dozen other hardware problems and provides some generic suggestions, but if you poke around Apple’s support site, there is a page devoted to the topic. That page explains the error by saying:

“If your iOS device has Touch ID, iOS checks that the Touch ID sensor matches your device’s other components during an update or restore. This check keeps your device and the iOS features related to Touch ID secure. When iOS finds an unidentified or unexpected Touch ID module, the check fails.”

What’s important in this section is that the Touch ID fingerprint sensor is matched to the other hardware components of that device, such as the motherboard or cable that connects the Touch ID sensor to the motherboard. It’s not a surprise that Apple prefers that only its parts be used in an iPhone, but the idea that the parts are aware of, and dependent on, each other is somewhat new.

See also: How to Fix iTunes Error 53 ?
How to Recover Deleted Photos From iTunes Backup?

It makes sense that Apple would implement such strict security around Touch ID. After all, Touch ID contains your fingerprint, a crucial piece of personally identifiable information that could be used for mayhem like identity theft. It’s also used to secure both your iPhone and Apple Pay. An iPhone whose Touch ID unit doesn’t match the rest of its hardware, could have been tampered with in some way, opening it up to attack.

Since the components of your iPhone are aware of each other, getting a repair with components that don’t match can cause iPhone error 53. For example, it may seem like you can repair a cracked screen or a broken Home button with any compatible part, but if those parts don’t all match each other—which is something most third-party repair shops probably can’t determine—you could get the error.

Bottom line: If you’re seeing error 53, it’s most likely because you had a repair done using parts that don’t match each other.

How to Avoid Error 53

It’s well known that Apple is very strict with its warranties and that any repair made to an iPhone by anyone other than Apple or an authorized third-party repair provider will void that warranty. This is a good example of why.

To avoid this error, and rendering your iPhone useless, always make sure to get repairs from Apple or an authorized provider.

What You Can Do About It

If you’re already seeing error 53, the only solution is to contact Apple to have them replace the faulty part with a matching one. The downside of this is that, because you had an unauthorized party make the original repair, your iPhone is no longer in warranty and the repair will cost more. Apple can provide an estimate of the repair cost and you can decide whether it makes sense to get the repair or to buy a new phone.