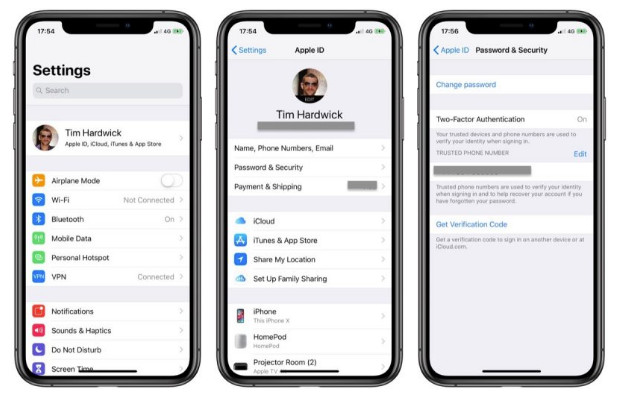 Apple’s most recent patent filing reveals plans to beef up Touch ID and bring it back to the iPhone in 2020 along with 5G connectivity. Also, the most important updates to Apple’s new MacBooks.

Apple could bring Touch ID back to the next iPhone

There have been plenty of rumors about an in-screen fingerprint scanner on the next iPhone, dating back to the pre-Face ID days. But Apple’s latest patent all but confirms the company’s plans to bring back Touch ID in the future. Just maybe not all that soon.

The latest patent, published in Patently Apple, shows how the company plans to embed pinhole cameras behind the screen of the phone, which would be capable of creating a 3D map of your fingerprint regardless of where you position your finger.

Apple likely wouldn’t be replacing Face ID anytime soon, but this new in-screen Touch ID could be used as a supplementary form of biometric identification to make your iPhone even more secure.

What’s exciting about this patent is that it shows pictures of a working prototype, meaning Apple is pretty far along in the development process. The bad news is that it likely wouldn’t be ready to go into mass production until the 2020 cycle. This is also the year Apple is rumored to be bringing 5G connectivity to the iPhone after reaching a settlement with Qualcomm to use its 5G chips. And 2020 can’t come soon enough.

This year’s iPhone 11 is rumored to have few major changes, aside from a three-camera array on the back and reverse wireless charging. An in-screen fingerprint scanner might have helped entice users to upgrade with the next iPhone release.

Apple announced its new MacBook Pros this week with important but practically imperceptible upgrades. On the outside they could be easily confused with last year’s models, but they’re now powered by Intel’s ninth-generation Core i7 and Core i9 CPUs, in both six-core and eight-core versions, making them the first MacBooks with an eight-core processor, the most powerful ever.

As for the keyboard on the new machines, they still have the traditional butterfly switch mechanism that has caused so many keyboard issues for Apple in previous models, but this time around it’s using a new material Apple says will help solve its sticky key problem.

Apple was vague about details regarding the changes in material, but a few days later, repair site iFixit had already published its own teardown of the machine detailing the changes. According to the report, Apple seems to have swapped out the silicone membrane found underneath each key that helps protect against dust and other “contaminants.” iFixit also said that the “metal dome” — what gets pushed down when you press a key, then pops back up when you release — also may have been changed, but it is less certain of that switch.

But even with the full teardown, it’s hard to know how these subtle changes will affect the performance of these new keyboards and the jury’s still out on Apple’s latest fix.

Apple’s plan to fix its keyboard issue for good

The new material wasn’t Apple’s only attempt at fixing its keyboard problems. The same day the company launched the new MacBook Pros, it also announced it would be extending its Keyboard service program to replace all MacBooks’ faulty keyboards from 2015 onward, and that the repair program would be sped up to get users back up and running faster.

In 2015, Apple switched from the traditional scissor mechanism to a butterfly-switch keyboard. This new solution debuted on the 12-inch Retina Macbook and allowed Apple to build a thinner machine. Soon after, users began to complain about unresponsive or sticky keys and letters or characters that would repeat unexpectedly when typing or would just flat-out refuse to type.

After years of brushing the issue aside, Apple finally acknowledged in June of last year that ” a very small percentage of keyboards” were experiencing issues and offered free repairs.

But the fix only covered first-generation and second-generation keyboards, and repairs could take over a week. The news now extends the repair program to all models, including third-generation keyboards as well as the ones in the newest MacBooks. And those who’ve already paid for repairs can contact Apple for a refund.