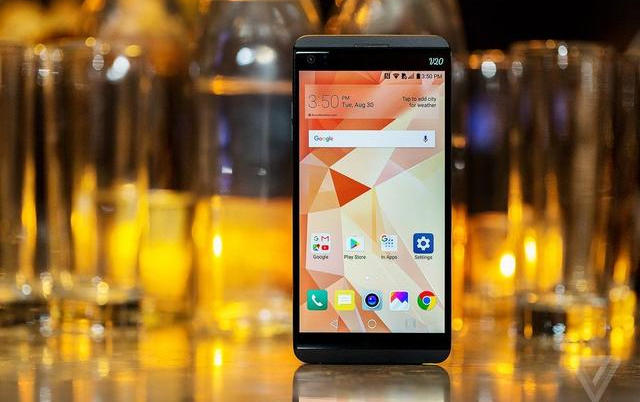 The next flagship phone from the South Korean manufacturer just unveiled in San Francisco, and the V20 is the first phone to run Android 7.0 Nougat out of the box, it’s set to begin rolling out globally this month and will be available in three color options: titan (dark gray), silver, and pink.
The V20’s outward appearance is much closer to this year’s G5 than the V10. The grippy rubber back has been replaced by smooth aluminum with a fingerprint sensor/home button where your index finger naturally rests. A button on the phone’s right side lets you pop off that metal backplate and replace the phone’s battery in seconds, but this device isn’t at all “modular” like the G5. There are no “friends” or add-ons to slot into the bottom.

The durable stainless steel side rails — another standout of the V10’s design — are history. Further, LG chose to make the top and bottom segments of the phone from silicon polycarbonate, a decision that might disappoint some after the build quality questions that arose with the G5. It doesn’t feel as substantial as the V10 before it, but LG insists that the V20 can withstand everyday drops without incident thanks to that silicon polycarbonate material. It’s rated MIL-STD 810G drop and shock resistant.

Despite those big design changes, the V20 does bring back one signature from the V10: its second screen. To the upper right of the primary 5.7-inch QHD IPS LCD display is a tiny horizontal screen that shows app shortcuts, notifications, and gimmicks like a personal signature. The second screen is useful in that it frees up the primary display for content and gives notifications their own dedicated space. This time LG says the second screen gets brighter and has improved contrast over the V10. Just like last time, you’re free to turn it off completely if you so desire. But some other software tricks are tied to the second screen. If you’ve got the signature feature turned on, for example, LG uses the first letter you’ve chosen for custom wallpapers. It’s a weird, silly feature that most people won’t even realize exists.

On the inside, the V20 checks all the boxes for a 2016 flagship: Qualcomm Snapdragon 820 processor, 4GB of RAM, and 64GB of storage. The increase in storage is great to see here, just as it was when Samsung bumped the Note 7’s default to 64GB earlier this summer. Hopefully other Android makers follow along — at least when it comes to premium phones. The V20 supports microSD cards up to 2TB, and the (replaceable) battery is rated at 3200mAh. That capacity doesn’t quite match the Galaxy S7 Edge or Note 7, but there’s no faster way to go from zero to 100 percent than swapping out a dead battery for a fully charged spare. If you do get caught without another battery to put in, the V20 is Quick Charge 3.0-compatible through its USB-C jack. Battery swapping comes at a cost, though; the V20 doesn’t offer any kind of water resistance, so it’s unlikely to survive an unexpected swim.

LG is very eager to talk up the V20’s audio chops as well. It features a 32-bit quad DAC setup that should make for sublime headphone listening, though we haven’t had an opportunity to test out that experience just yet. Still, whereas Apple is reportedly mere hours from ditching the headphone jack, LG is in a mindset of “look at what’s still possible.” The V10 was already a winner there, and LG is definitely trying to appeal to the audiophile crowd with this series. Bang & Olufsen helped fine tune playback performance, and audio nerds will also appreciate 72-stage volume control and support for all the popular lossless music formats including Apple Lossless. And LG claims the microphone setup inside the V20 can record everything from voice memos to loud rock concerts without any distortion or clipping; when shooting video, you can even choose to save the audio side as lossless to preserve the highest quality possible.

Speaking of the cameras, LG has done away with the V10’s two selfie cameras. This time you get a single 5-megapixel f/1.9 wide angle shooter on the front. The dual-camera approach has instead been moved to the V20’s backside, which includes both a “standard angle” 16MP sensor with f/1.8 aperture and optical image stablization, plus a much wider 8MP camera with an aperture of f/2.8.

Read also: Backup Your Phone Before Upgrading to Android 7.0 Nougat