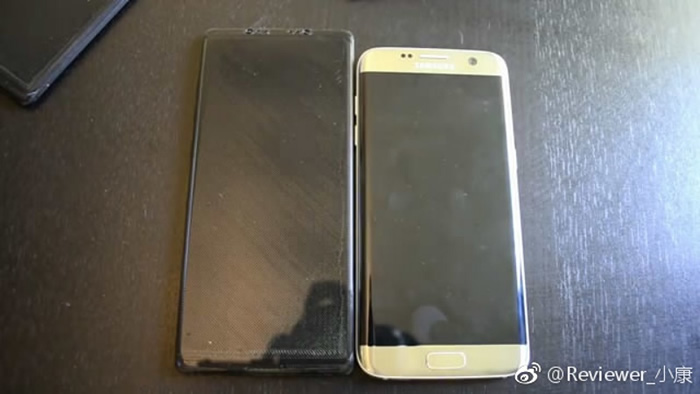 In a surprising move, Samsung’s mobile chief DJ Koh announced in April that the company has plans to release the successor to the infamous Galaxy Note 7 later this year. In the recent past, a few details of Samsung’s upcoming smartphone presumably called Galaxy Note 8 were leaked on the Internet. Now, a new report based on Galaxy Note 8’s dummy images claims that the device could feature a display-embedded fingerprint scanner and a vertical dual camera setup at the rear side.

The Samsung Galaxy Note 8 hit the Internet earlier this month with revelations about the cameras the device is said to have along with other specifications. Talking about the new leak, a Weibo user shared demo images of a dummy handset that looks like Galaxy Note 8, as spotted by Telefoonabonnement. For the uninitiated, a dummy device is shipped by the manufacturing company to the makers of mobile cases and screen protectors to figure the exact shape and size for the upcoming phone.

As evident from the images, the device dummy bears a dual-camera setup aligned vertically at the centre on the rear side. Also, there is a flashlight module located below the camera setup. The Samsung Galaxy Note 8 has already been earlier tipped to feature a dual camera setup, which will bear a 12-megapixel wide-angle CIS supporting dual photodiode sensor, and a 13-megapixel telephoto CIS sensor. It will additionally support 3X optical zoom, come with dual 6P lenses, and support dual OIS as well. Notably, the Samsung Note 8 had previously been considered to become the first Samsung smartphone to carry a dual camera setup, but a recent leak suggests that Samsung Galaxy C10 could be the flagbearer of Samsung’s dual camera technology instead.

In the leaked photos, the Weibo user placed the Galaxy Note 8 dummy next to the Samsung Galaxy S7 edge to compare the size and shape of the phablet. We can see in the images that the new smartphone will be bigger than Galaxy S7 edge with a more rectangular shape comparatively. Additionally, the Galaxy Note 8 dummy reveals that it could bear a body display ratio that will be more than 83 percent of both Samsung Galaxy S8 smartphones.

Moving to the specifications, the Galaxy Note 8 is expected to come with a 6.3-inch display, powered by the Qualcomm Snapdragon 835 SoC in the US, and the Exynos 8895 chipset outside the US. Samsung’s S Pen will obviously be equipped with the device. It is said to house a 3700mAh battery under the hood.

The Samsung Galaxy Note 8 is expected to be unveiled at IFA 2017 in Berlin.