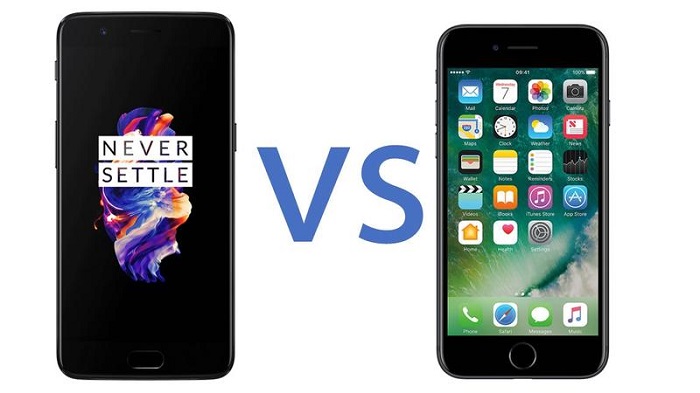 The OnePlus 5 arrives mere months after the 3T, but this latest flagship dials everything up a notch once again – not to 11, but it’s certainly a match for the A-listers.

One of those is, of course, the iPhone 7. And here we compare the two in detail so you can see how they differ and decide which is the best buy for    you.
3）OnePlus 5 vs iPhone 7: Which is cheapest?
£50 has been added onto the bill compared to the 3T, so for the 64GB storage / 6GB RAM model, you’ll pay £449 to buy the OnePlus 5 SIM-free.

Find out more about where to buy the OnePlus 5 and the new trade-in scheme.

There’s a 128GB / 8GB version, too, which costs £499. 8GB is more than many laptops, so this is likely overkill for most people, but the £50 premium is worth it for the extra storage if you need it.

Apple’s iPhone 7 starts at £599, considerably more. It’s available direct from Apple, plus plenty of other retailers. And that has a meagre (and not-expandable) 32GB of storage. You’ll need to part with an extra £100 to get 128GB, and that amount again for 256GB.

So although the OnePlus 5 is the most expensive yet, it still looks like great value when compared to the iPhone.
4）Features and design
There’s no denying that the latest OnePlus looks rather a lot like the iPhone 7 Plus, especially in black, and the similarities extend beyond aesthetics. On the rear are two cameras and, yes, they work exactly like the iPhone’s. One has a normal field of view, the other a 2x zoom.

It also has a 5.5in full HD screen, but this is housed in a smaller, lighter frame. 5）But this isn’t a comparison to the 7 Plus, so let’s see how it stacks up against the 7. It’s fairly obvious that the OnePlus 5 offers – in general – better specs for less money. It loses out by lacking an IP67 or IP68 certification for water-resistance, however.

But you can’t choose a phone by specifications alone, especially where cameras are concerned. (We’ll get to these in a bit.)

Fortunately, both phones are top notch in terms of performance. They’re speedy whether navigating around their respective operating systems, playing Asphalt 8 or browsing the web. Don’t forget that the OnePlus 5 has essentially the same internals as much more expensive Android phones such as the Galaxy S8, HTC U11 and Sony Xperia XZ Premium.

Build quality, too, is excellent in both camps. They both have good-quality screens, although the iPhone’s lower resolution is noticeable. There’s a difference in technology, too, with the iPhone sticking with LCD, the OnePlus using AMOLED.

Ultimately, while the iPhone has a very good screen, it’s beaten by the OnePlus 5’s.
6）Cameras
Each video’s soundtrack is detailed and great quality, and the iPhone has no problems quickly refocusing or adjusting to changing lighting conditions.

The OnePlus 5, too, is capable of excellent photos no matter how bright or dark it gets. Auto HDR helps with this, just as on the iPhone. Those are benefits you get only with the 7 Plus: not the 7.

The chink in the OnePlus 5’s armour is video. Although it has OIS, video isn’t nearly as stable as the iPhone’s. Audio quality falls short of the iPhone’s standard too.
7）Software

If you like to customise your phone, you’ll love the OnePlus. As well as the alert slider which toggles between three profiles (such as ‘ring’, ‘silent’ and ‘mute’) you can choose what a long-press and double-tap on each of the three navigation buttons does, such as launching the camera app. You can double-tap the screen to wake the phone, or draw one of several letters on the screen even in sleep mode to launch whichever app you like.

Later this year, iOS 11 will be available as a free update for the iPhone 7, but it’s nowhere near as configurable as Android. Sure, you’ll be able to customise the Control Centre, but it’s much more limiting in most other respects.

It does have one feature the OnePlus lacks: 3D Touch. You can press the screen harder than usual to bring up things like context menus and previews of web pages and more: The iPhone 7’s battery life is a sore point. Even with the more efficient A10 processor, the small capacity does count against the phone. It’s rare to get through a day without needing a top up before bedtime.

By contrast, the OnePlus 5 has usually 10 percent to spare, meaning you don’t have to carry a power bank or a mains charger. However, it is a little annoying that you can only fast charge with OnePlus’ own Dash Charge. The phone charges agonisingly slowly with any other USB-C charger.
Both the iPhone 7 and OnePlus 5 are great phones, but the latter has the edge on price as well as its bigger, higher-resolution screen. The base storage is also twice the iPhone’s, it has dual rear cameras and better battery life. It’s always hard to make a choice between Android and iOS, but as long as you’re not already tied in to one OS, the OnePlus 5 is the better-value phone in this comparison.

Related: How to Backup and Restore OnePlus 5