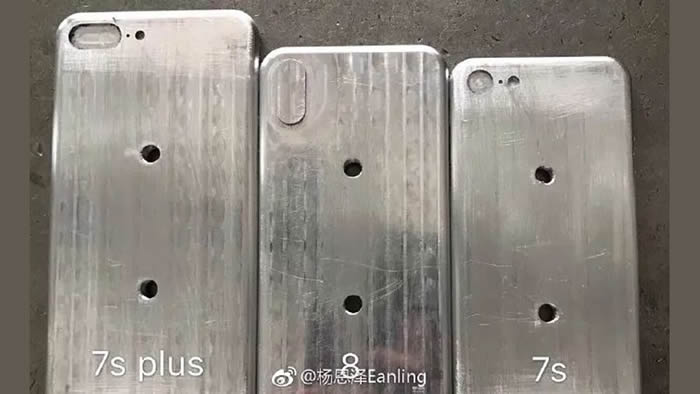 By the end of September, Apple will almost certainly have unveiled its new iPhone models for this year – but until then we’re left with leaks, rumors and speculation when it comes to predicting what’s ahead. Another piece of the 2017 iPhone puzzle just showed up online, in the form of an image showing molds for three iPhone models.

Published on Weibo and reported by 9to5Mac, the picture shows chassis molds for the iPhone 8, the iPhone 7S, and the iPhone 7S Plus, the three handsets that had been widely expected to appear later this year. As previously predicted, the iPhone 8 is closer in size to the iPhone 7S than its bigger brother.

We also get a look at the camera position and sizes, and again what we see here fits in with what we’ve already heard: dual-lens cameras for the two larger iPhones, and a vertical configuration for the iPhone 8, maybe to power some kind of augmented reality feature.

Based on everything that’s been hinted at so far, it’s gradually become clear that Apple is planning a minor upgrade for the standard iPhone models – the iPhone 7S and the iPhone 7S Plus – as well as a special one-off model to celebrate the tenth year of Apple’s iconic handset in the shape of the iPhone 8.

With a lot of premium materials and upgraded tech crammed into the iPhone 8, including a front-facing display that takes up almost the entire frame, it has been rumored that this model is going to go on sale later than usual. Meanwhile the usual camera and processor bumps are being rumored for all three handsets, as well as perhaps a long-overdue upgrade in display resolution.

This new image doesn’t come from a particularly well-known source, and it’s worth bearing in mind that these molds are probably being used to make cases rather than actual iPhones; but the photo does back up other rumors that we’ve heard up to this point, as well as giving us an interesting look at the relative sizes of this year’s iPhones.