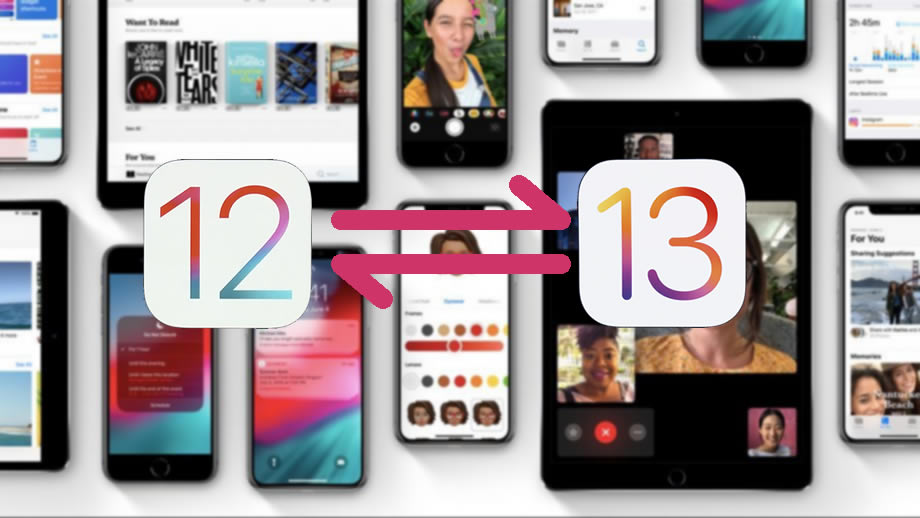 iOS 13 has now landed in public beta form today, meaning that if you’re feeling adventurous you can download it now.

The question you’ve got to ask yourself is whether it’s worth the bugs and instability to get on board early, and to help answer that we’ve compared iOS 13 with iOS 12, so you can see exactly what’s new and different. iOS 13 has most of the stuff iOS 12 has, but it also has a whole lot more, and lots of improvements, as you’ll see below.

We’ve also highlighted which devices each version is actually available for, and when those less adventurous Apple users will be able to join the party.

iOS 13 vs iOS 12: availability and compatibility

The iOS 13 public beta is available now, with the final, finished release likely to land sometime in September, alongside the iPhone 11 range. iOS 12 of course is available in full, finished form already, and if you have an iOS device then chances are that’s what it’s running.

iOS 13 won’t be compatible with all devices that can run iOS 12 though. You need an iPhone 6S or iPhone SE or later, or an iPod Touch 7th Gen. That notably counts out the iPhone 5S, iPhone 6 and iPhone 6 Plus, all of which can run iOS 12.

Some iPads won’t be compatible with this year’s big update either, but no iPads are getting iOS 13, rather, compatible ones will be getting the new iPadOS.

Two big new features for iOS 13 are Dark Mode and Sign In with Apple. The former is a system-wide dark color scheme that also works with all native apps and will be available for third-party developers to integrate into their apps.

It’s designed to make using your iPhone easier on your eyes when in a low-light environment, and it can be set to come on at sunset or a specific time. There’s also a quick toggle for it in Control Center. Of course, you might also decide you just prefer using Dark Mode all the time.

Sign In with Apple meanwhile lets you use your Apple ID to sign into apps and sites with a single tap. It’s a similar idea to the sign in services Facebook and Google offer, but it puts privacy first, letting you do things like hide your email address. Apple also won’t track your activity or create a profile on you from it.

Apple claims that apps launch up to two times faster using iOS 13, while Face ID is up to 30% faster. App downloads and updates are also set to get a lot smaller from “this fall”, though that will presumably apply to users on iOS 12 as well.

Siri seems to get better with every new version of iOS. iOS 12 enhanced Siri’s translation skills, massively improved its ability to make useful suggestions, and added Siri Shortcuts, which lets you create custom quick actions that you can trigger with a specific phrase. Siri will even suggest some Shortcuts that you might like to make as it learns your routine.

With iOS 13 that’s all still there of course, but it’s now even better, as Siri can ask follow-up questions when running a shortcut if any extra information is needed. Siri’s ability to make suggestions has also been further improved. For example, it can suggest specific shortcuts based on the time or location.

And you’re going to enjoy interacting with Siri more, as its voice has been made to sound more natural. This is thanks to ‘advanced neural text-to-speech technology’.

The camera and photos are two other areas that have been given a lot of attention for iOS 13. These features weren’t such a focus in iOS 12, but they weren’t completely ignored either.

The camera for example got an improved Portrait Lighting mode as part of iOS 12, while QR code reading became automatic, and the ability to search for specific photos was improved, as you could search by event and use multiple search terms at once.

With iOS 13, you can change the intensity of light in Portrait Mode, and a new monochromatic effect has been added. There’s also a completely redesigned editing experience, letting you individually review each effect and make use of new editing tools in the Photos app, such as ‘Vibrance’, ‘Noise Reduction’ and ‘Perspective Correction.’

The biggest change though comes to how photos are displayed, with a new Photos tab that can highlight shots from specific days, months or years.

Apple added more details to Maps with iOS 12, along with things like more accurate entrance locations and more up-to-date information, as well as switching to using its own mapping information, rather than relying on third parties.

With iOS 13 though Maps lets you get a look at places at ground level, in 3D, similar to Google Street View.

You can also get real-time transit information, and in select locations there are more realistic, detailed maps. Plus, you can more easily access favorite locations, so setting up navigation for places you often travel to is quicker.

Apple has also redesigned the Reminders app for iOS 13, giving it a completely new interface, support for attachments, and ‘smart lists’, which automatically organize and display your reminders, giving you the choice to view just those that are relevant today, flagged reminders, scheduled ones, or all of them.

Messages has been improved too. In iOS 12, Apple let you further personalize your interactions with extra Animoji and the Memoji feature (which creates a cartoon version of your own face).

Now, with iOS 13, Apple has added three more Animoji (an octopus, a mouse and a cow) and added loads more customization options for Memoji. Your phone can also now automatically generate sticker packs featuring your Animoji and Memoji.

As for the Messages app itself, you can now share your name and photo – but you can choose whether to do this with everyone, just your contacts, or no one. The search tool in Messages has also been improved. It will automatically display recent messages, images and the like that you might be searching for before you even start typing, then once you do type it will categorize the results.

iOS 12 added ARKit 2, which allowed for shared experiences in AR, opening the doors to all sorts of multiplayer AR games and apps.

With iOS 13, Apple has moved to ARKit 3, which allows AR content to realistically pass behind or in front of people in the real world, helping it look more realistic.

It also allows AR experiences to use both the front and rear cameras on your device at the same time, track multiple faces, and with Reality Composer you can create your own AR scenes, using simple drag and drop controls.

That’s most of the headline features of iOS 13 covered, but there’s a whole lot more here too. iOS 12 added Grouped Notifications, screen time information, improvements to Do Not Disturb, a new Measure app, and more, including small updates to most of the stock apps.

You’ll find all of this in iOS 13 too, but with further additions and updates. For example, CarPlay, voice control, Safari, Notes, the App Store, Apple Health, Apple Music and more have all been updated in ways small and large.

You may also need to know: