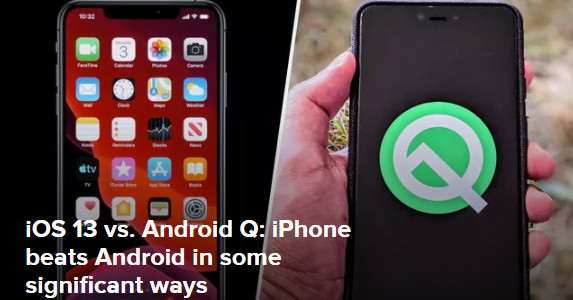 Without the software that powers them, iPhones and Android phones would be slabs of glass, metal and plastic. So let’s see how the upcoming mobile OSes from Apple and Google compare, now that Apple has announced iOS 13 for iPhones at its annual WWDC event. On one side of the table, iOS 13 includes a systemwide dark mode, more control over privacy settings and a bushel of improvements designed to make the iPhone more secure and easier to use. On the other side, Google’s Android Q also brings on dark mode, a focus on privacy and useful AI enhancements.

While Android Q is in its four beta (we’ve been using it for months), iOS 13’s beta is only available for developers now, with a public beta coming in July and the final release pushing to iPhones in fall (iPhones that will be compatible with iOS 13 stretch back to the iPhone 6S). Android Q’s final release — renamed to whatever Q dessert Google comes up with — will ship by fall.

That means we’re basing this comparison on the features Apple showed off at its developer conference and the ones we’ve seen from Google so far, and not yet on direct comparison on final devices. We’ll save that real-world battle for after the final version of iOS 13 and Android Q come out.

One final note — this piece doesn’t cover every feature that Apple or Google announced. It focuses on the main elements that we think are the most interesting, useful and important to everyday people. Here’s a more complete list of the key features in iOS 13.
Apple iOS 13: New Siri voice, camera tools, Dark Mode for iPhone
New Mac Pro makes its debut, starts at $5,999
Apple gives the iPad its own OS
Returning to Apple’s WWDC after 20 years, now with 5 OSes instead of 1
Get all the latest from WWDC

Over the years, Apple has made keeping user data private a selling point. And unlike Google, Apple’s business is not dependent on targeted ads based on user data, instead making money on the hardware, apps and services it offers. At WWDC, Apple said it would give users greater control of location permissions with apps, choosing to share that info once and then have the app request it again if it wants it. Apple also unveiled a new sign-in method that lets you anonymously sign into websites and apps without being tracked. The feature, Sign in with Apple, will be mandatory for apps to include this fall.

Google also talks up protecting user data, most recently in a New York Times opinion piece where Google CEO Sundar Pichai wrote that “privacy cannot be a luxury good offered only to people who can afford to buy premium products and services.” But Google has a tougher case to make because a major source of revenue is its ad business, based on what users search for, for example, and which videos they watch. It does take a big step in the right direction with the next version of Android: Android Q gives users more control over what information they share through apps and services.

But the two companies’ approaches to privacy show up in different ways. For example, Google is working on an update to its Chrome browser that developers say may hobble ad-blocking and privacy extensions. In contrast, Apple last year announced Safari would prevent third-party trackers from monitoring your activities across the web.

Dark mode for all
Advantage: iOS 13

Besides letting you switch it up from a bright white screen, turning on a dark mode can offer the benefit of preserving battery life by lighting up fewer pixels on the screen and also reducing eye strain. Google folded a dark mode into an Android Pie update earlier this year, but the company didn’t use the theme everywhere. In the early betas of Android Q, the dark theme is more evenly distributed across the mobile OS. Some of Google’s mobile apps, including Gmail and Chrome, still lack a dark mode option, however.

Apple has more experience in this area. It went moody on the desktop first and rolled out a dark appearance in MacOS Mojave in 2018. In iOS 13, Apple will bring a dark theme to its mobile OS. At its Worldwide Developers Conference this week, Apple lists a broad collection of places that display the dark mode theme — from wallpaper, widgets and notifications to Calendar to Messages — and from the brief glimpse we got of it, iOS 13 should offer a more uniform dark experience.

Google Photos offers almost everything you’d want in a photo service. It combines effortless backup and photo sharing with powerful, easy-to-use editing tools to create an essential photography tool for an Android phone. Night Site mode on Pixel phones almost by itself is enough to tip the scale to Android. Because its from Google, you can search for people, places and things to see all the images Google Photos has assigned the tag to. And the first 15GB of online storage is free.

Apple Photos comes with a rich of editing tools, and in iOS 13, the app will gain even more, including the ability to adjust the intensity of portrait lighting with a slider. Apple Photos excels at recognizing faces, objects and scenes to help you sort through your images. Unfortunately, much of the app’s power is available just to Apple’s users. And the first 5GB of iCloud storage is free.

Running mobile apps in other places
Advantage: iOS 13 (and MacOS)

At last year’s developer conference, Apple said it would start moving some of its own iOS apps to MacOS using a new developer tool that was named Project Marzipan and is actually now named Project Catalyst.

This week, Apple said it would start letting iPadOS developers bring their own iPad apps to Mac. The move should benefit developers — who will be able to more easily create an app that can run on Apple’s mobile and desktop platforms — and Mac users, who potentially get access to a richer selection of apps.

Google also lets app developers move software between platforms by giving owners of recent Chromebooks access to Android apps through the Google Play Store. But the limitations of Chromebooks — they require an Internet connection, for example, and they lack popular Windows and MacOS apps such as Microsoft Office and Adobe Photoshop — also limit the usefulness of this option.

With Apple Arcade, you’ll be able to play games on your iPhone, iPad, Mac and Apple TV devices. Interestingly, Apple at WWDC said Arcade will work with Xbox One S and PlayStation DualShock 4 controllers.

Google with its Stadia service is all about streaming games and will let you play them anywhere you can find a Chrome browser. Google Stadia will have its own controller and work with third-party controllers.

With Arcade coming later this year — and Stadia debuting in November — we have little to go on beyond studying video demos of each service (and playing with Stadia for a bit at the recent Game Developer Conference), but we’d suggest if you like console games and have a good internet connection, Stadia might be a good fit with its controller-driven service. If you’re a casual gamer who likes playing mobile and indie games in your spare time, Apple’s approach might be a better fit.

Apple puts its messaging focus on FaceTime and Messages, which are hard to beat for video and text chat. Communications are encrypted end to end. The messaging handoff between iOS and MacOS devices is seamless. And you can further customize Memoji avatars.

Google’s messaging approach on Android is, err, more varied, with Duo and Hangouts for voice and video calls, Google Voice for dedicated voice calls, Hangouts Meet and Chat for business communication, and Messages for text messaging. You can use the Hangouts website to continue messaging on your Mac and Windows device, and you can keep up with your Messages texts via the web version of the app. The web version is handy but not flawless, and it sometimes seems to forget it’s connected to the mobile version of the service.

Apple may have been first out of the voice assistant gate in 2011 with Siri, but Google Assistant runs circles around it, and over the years, Apple has done little to close the gap. In iOS 13, Siri gets a new robot voice and picks up a few tricks here and there, like searching for WatchOS apps on the Apple Watch and being able to read and respond to incoming messages through AirPods and stream radio stations. iOS 13 will also come preloaded with Siri Shortcuts.

But Siri doesn’t perform nearly as well as Google Assistant at recognizing and understanding different voices and commands. It’s this basic functionality that’s at the heart of the issue, but Google assistant is also integrated tightly into everything you do on your phone, and can proactively make recommendations by looking at your calendar and Gmail account for upcoming reservations and appointments.

Google has put its assistant on every Android phones, in the $49 Google Home Mini and $299 Google Home Max, and into cars as Assistant Driving Mode, and at its recent Google I/O developer conference, the company showed off a range of Google Assistant personalization features.

Siri is also widely available — working on iOS, MacOS and WatchOS devices and the HomePod. Siri shortcuts can create personalized tasks that Apple’s smart assistant can perform for you. However, Siri is still underwhelming, mostly because the database it draws from is limited, while Google rules search.

If you swipe instead of type, iOS 13 gaining a swipable keyboard is a big — but extremely belated — deal. Google has its own swipable keyboard, Gboard, and many other Android phones implement other apps like SwiftKey, into their default virtual keyboards.

There is a lot to like about Gboard, especially, beyond its swiping capabilities. I like being able to apply different themes, use different languages and easily insert GIFs. Apple’s demo of QuickPath Typing, the swiping part of the iOS 13 keyboard, looks good as well, but it’s so far behind the competition, it’s hard to see this as anything but long overdue catch-up.

If you just need to get from here to there, Apple Maps is up to task. And with iOS 13, Apple is rebuilding Maps to include better road and pedestrian information and more precise addresses. Apple’s upcoming Maps app will also have a Look Around tool that lets you see a 3D view of a location.

Google Maps has had these features for a while, however, including its own 3D mode called Street View. But Google has much more, constantly updating its Maps app to make it even more useful getting you places, in part by folding in the useful bits of its other map app, Waze. But Maps is also useful after you arrive. For example, its Explore tab lets you find a seemingly endless list of places to eat and things to do in your area.