How to Use Slide Over Multitasking on iPad 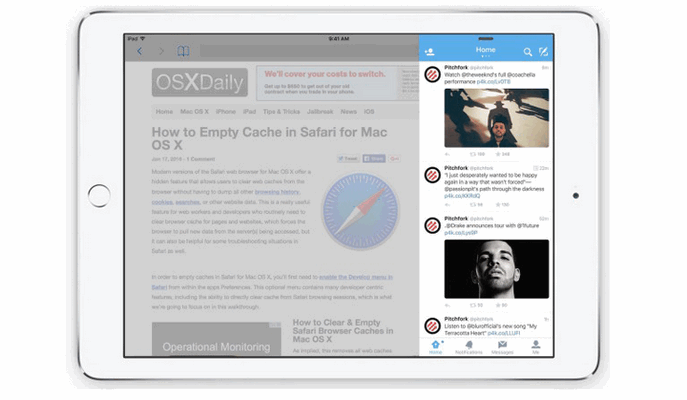 iOS for iPad has dramatically improved multitasking with Spit View dual-pane apps and its counterpart, Slide Over. The Slide Over feature lets you quickly reference, use, and access secondary apps on the iPad without having to enter into full fledged split screen app mode, and without having to switch apps. This feature is great for quickly replying to an email, message, checking Twitter, making a note, or doing quick tasks in another app where you don’t want to lose the primary app focus on an iPad.

Slide Over is really useful, particularly once you get the swing of things, here’s how you can use it now on the iPad to improve your on-device multitasking.

How to Enter Slide Over on iPad

This requires a compatible iPad with a modern version of iOS: As you may know from using Split View, if you continue to pull over to the left side of the screen from Slide Over view, the app will enter into Split View instead.

If you have a Picture in Picture video window open on the iPad, that video will continue to work while accessing Slide Over and Split View.

Switching Slide Over Apps on iPad

Exiting Slide Over on iPad

To exit out of Slide Over view, simply swipe the Slide Over panel back to the right of the screen to dismiss it.

Much like Picture in Picture mode and Split View, Slide Over supports only the latest iPad devices, including iPad Pro, iPad Air, and iPad Mini 2 and later releases. Earlier versions and iPhone models aren’t supported with the great multitasking feature, even if they’re running the latest versions of iOS, though on supported hardware anything with post 9.0 release will have the feature.

How to download and play 4K video on iPad mini

How to Tranfer Ebooks from Kindle to iPad