How to stop your smartphones from being overheat 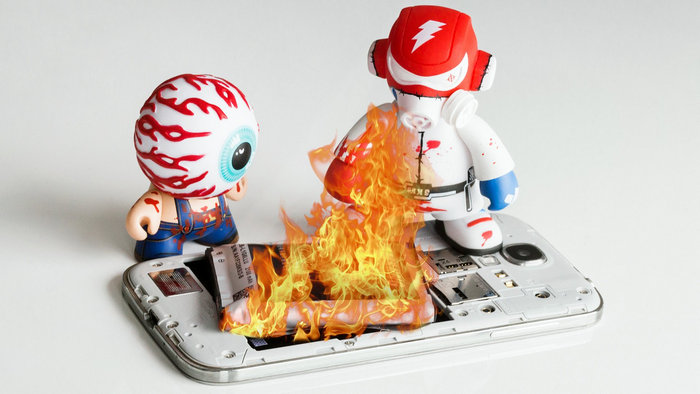 Smartphones will warm up from the moment you switch them on; this is unavoidable. But phone overheating can be a serious issue, damaging devices and affecting performance. What causes a smartphone to heat up, what causes it to overheat, and how can it be avoided?

Why do smartphones heat up?

The answer lies in a basic property of physics: movement generates heat. Our smartphones have to physically move things around to work at all, so they have to generate heat. The amount of heat your smartphone produces is largely proportional to the amount of electricity moving through it. If you’re playing a game that demands a lot from your central and graphics processing units, both housed in a central system-on-a-chip (SoC), they will become warm, as they require more power to carry out their tasks.

Your phone becoming warm is no reason to worry, they’re designed to work that way, but if it becomes unpleasantly hot, you probably have cause for concern. Why do smartphones overheat?

Generally speaking, SoCs are extremely well optimized, and overheating is rarely an issue. They are specifically designed to handle high temperatures. When your device approaches a potentially damaging temperature, the processor speed will be reduced, making slower operating speeds one of the signs of overheating; under more severe circumstances, a warning will be displayed, preventing you from using the device until it has cooled.

If your device is experiencing frequent overheating, it could be for a number of solvable reasons, mostly related to overloading the hardware. Pushing your GPU for too long is one of the quickest ways to overheat your phone (as anyone who has tried a Gear VR knows all too well). The same can happen with demanding apps, but the burden will here fall on the CPU. Multitasking, extra features and functions, like widgets, and, for whatever reason, your phone having to check its connectivity – be it Wi-Fi, Bluetooth, whatever – all require processing power – warming the SoC – and more electricity – warming the battery. Other factors that can lead to overheating are external: leaving your smartphone out in direct sunlight, for example, or throwing it into the oven. If you don’t overexert your phone and it still overheats to excess regularly, it could well be a hardware malfunction, and it would be worth trying to score a replacement.

There is no better example of poorly optimized hardware leading to overheating issues than the infamous Snapdragon 810. This was the flagship processor of 2015, and was featured in nigh-on every flagship device. From the very start it was plagued with rumors of overheating issues, and, while performance varied from device to device, the chip certainly throttled its processing speeds heavily and frequently to avoid overheating, leading to slower performance.

The problem particularly seemed to plague Sony devices, with the company issuing multiple software patches for its Xperia Z3+ and even adding cooling pipes into its Xperia Z5 models, something that Samsung also did with its latest flagships, the Galaxy S7 and S7 Edge.

While there are safety checks in place, and most phones don’t suffer from frequent overheating, when it does happen regularly or to extremes, the heat can damage your device.

What damage can be done?

Inside modern smartphones, you will find a lithium-ion battery. These are clever tricks of technology. A non-rechargeable battery only allows for a chemical reaction, designed to generate electricity, to happen in one direction: electrons leave the battery to travel through a circuit (your phone). Rechargeable batteries allow this reaction to go both ways, so the battery can give and take charge, and do it hundreds of times. Lithium-ion batteries are the best rechargeable batteries available at the moment, but they still have disadvantages. There are two main problems. One is that they degrade, even when they’re not used. This happens relatively slowly, but you’re still lucky to drag two or three years of use out of one. Secondly, they are very sensitive to heat. Anything over about 30 degrees centigrade is going to start negatively impacting a lithium-ion battery, and this is a temperature it probably climbs above every time you charge it.

The main impact heat has on the battery is that it speeds up its degradation and thus more rapidly reduces its capacity, leaving you with a dead battery sooner.

One of the most dramatic overheating symptoms is that it can cause a lithium-ion battery to explode. Although we’ve all read the horror stories in the press, the chances of a battery exploding are very slim. For it to happen, there needs to be a thermal runaway, a vicious feedback loop, where a rise in temperature increases the reaction rate, which in turn further increases the temperature, and so on. This process requires there to be either an internal malfunction, which is usually managed by a circuit breaker, or extreme external conditions (throwing it into a fire, for example). For a battery to explode, you will need to get it above 200 degrees celsius, a very unusual thing to have happen in everyday life. When it comes to the SoC, the processor speed will be throttled to prevent overheating, which slows your device down, sometimes to the point of unusability. If there is too much heat for too long, it can damage the chip physically. Again, as with the battery, this latter possibility is unlikely to happen, as there are safety measures in place. But even so, it can be concerning to feel excessive heat, and annoying to have to wait for your device to cool down. Some devices are prone to overheating (Sony Xperia Z3+, I’m looking at you), but it is unusual, otherwise.

How to avoid overheating

Pretty much the worst thing you can do to a battery is to expose it to heat when it is fully charged, so getting it to 100 percent is a bad thing, as your battery will be periodically checked and charged back up to 100 percent, applying stress. Depth of discharge also affects battery life, meaning it’s best not to let the charge run down to zero percent. If you charge from, say, 30 percent up to around 80 percent, you’re treating your battery nicely, and doing a good job of avoiding cell phone overheating. Although it might sound like a pain (it is), it could more than double the amount of charge cycles you get out of a battery.

Our in-house photographer, Ira, has intimate knowledge of the dangers of using a smartphone that is fully charged but still plugged in to a power outlet. She has had to replace five or six batteries in her Galaxy S3 (at a rate of one per year) and one swelled up like a balloon, as you can see in the pair of images above and below – anecdotal evidence warning of the dangers of overexerting a battery. To manage or prevent overheating of the SoC, ensure you don’t play demanding games or watch videos for too long, don’t multitask on applications that require a lot of processing power, try to avoid using Bluetooth for prolonged periods, and only use Wi-Fi if its stable. In essence, avoid as many demanding processes as possible.

Don’t overexert your phone or leave it in direct sunlight in mid-August, and you should generally be fine. Most modern smartphones are designed to deal with all but the most strenuous activities, and the chances of a catastrophic meltdown are miniscule. If temperatures are rising for no discernable reason, try to get a replacement, as the device is likely defective.

Read also: How to Backup iPhone Data Before Upgrading to iOS 10?