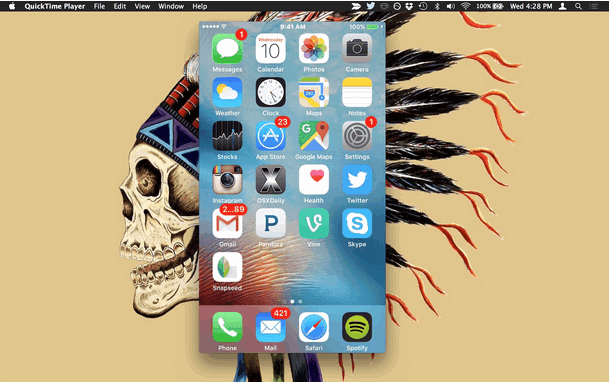 If you would like to capture and record the screen of an iPhone, iPad, or iPod touch, you can easily do so thanks to QuickTime, the video app that comes with every Mac. This offers a simple solution for recording the screen of an iOS device for demos, presentations, tutorials, and much more, and it’s remarkably simple to use.

Read Also: How to Extract iPhone Contacts to CSV to PC or Mac Freely
iPhone Backup Viewer on Mac

To get started capturing a video of an iPhone or iPad screen with QuickTime, you’ll need a USB cable, and want to be running a modern version of OS X on the Mac, and a modern version of iOS on the iPhone or iPad. Specific requirements and an alternative approach for older versions are discussed further below. But since most users already have all that is necessary on their Mac and iPhones right now, let’s jump right into recording the devices screen.

How to Record an iPhone / iPad Screen on Mac with QuickTime

That’s all there is to it, the saved iPhone screen recording will be a .mov video file. Opening the .mov file will default to launch in QuickTime, but you can edit the video in QuickTime, iMovie, Final Cut, convert it to another video format, upload it to share online, embed in a presentation, or whatever else you want to do with the screen capture.

* If you want to record the audio directly from the iPhone, choose the iPhone as the ‘Microphone’ source input as well, otherwise the video capture will come from the iPhone screen but the microphone will record from the Macs built-in mic.