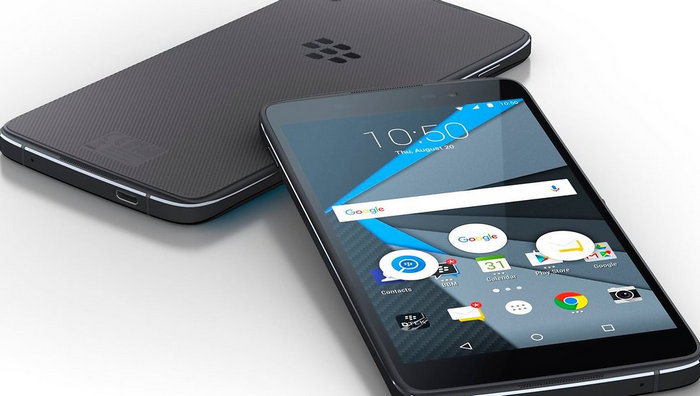 BlackBerry has officially presented its DTEK50. This mid-range smartphone will not be a successor to the Priv but start its own smartphone series. Next to the Priv, it’s the safest Android smartphone in the world. After the official presentation from BlackBerry, it has now published a webcast to present the BlackBerry DTEK50 with its first promotional video.
In a webcast, BlackBerry introduced the new DTEK50, the “safest” (BlackBerry’s words) Android smartphone in the world. Alex Thurber, senior vice president Global Device Sales, David Kleidermacher, Chief Security Officer, and Scott Wenger, Head of Marketing Device BlackBerry, were all in the webcast. They explained why BlackBerry just brought the DTEK50 on the market.

The BlackBerry DTEK50 is based on the Alcatel Idol 4, as BlackBerry confirmed, but the software contains many changes. Soon there will be another BlackBerry smartphone, which will then be available with a hardware keyboard. Clearly seen here are Idol 4 loudspeakers that radiate both forward and backward. Even the Boomkey of the Idol 4 was adopted by BlackBerry, but this is called the Convenience Key. This configurable button enables it to perform different actions.

Blackberry has designed its DTEK50 with some of its own apps like its own keyboard app, the BlackBerry Hub, customized BlackBerry calendar, contacts and notes apps, a password manager and DTEK security software.

BlackBerry DTEK50: And it shall be so

The most important selling point of BlackBerry is security. The DTEK app, which mainly serves as a visible sign of the various aspects of the theme of the group. DTEK shows users how the current security status of your smartphone looks. As an option, you can, for example, turn on notifications when an app accesses the site. In addition, DTEK gives tips on what settings can increase security. BlackBerry will increase safety and improve data protection on the smartphone.

Fast security updates are very much valued by BlackBerry: it plans to release Google’s monthly security updates immediately. Zero-day patching from the manufacturer is part of this approach.

Android in-turn has changed in the kernel, so that the operating system from attackers is safer than Google’s Android BlackBerry. This includes additional security patches, an improved random number generator for encryption tasks and  improved memory management. With these and a few other measures, BlackBerry is making it difficult for attackers to hack its smartphones.

The software of DTEK50 share a codebase with the Priv. Both smartphones are well-protected against attacks by malware or similar.

The DTEK50 is available for pre-order in the BlackBerry stores in the US, Canada and the UK. The US price is $299 for the package that includes the phone and charger. Deliveries are scheduled to begin on August 8. If you pre-order you’ll receive a 12,600 mAh power bank for free.