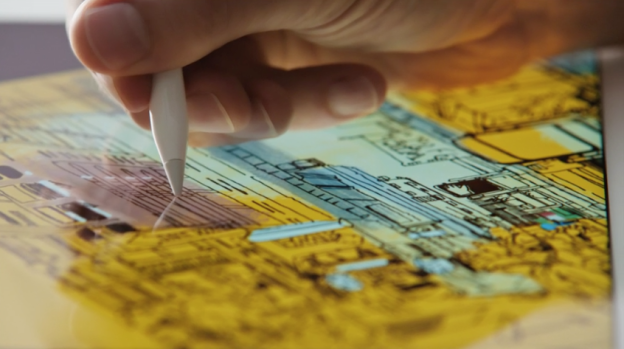 Apple last week finally took the wraps off of its long-rumored iPad Pro, a gargantuan tablet with a 12.9-inch display. Because Apple’s special event was jam-packed with new product announcements, from new iPhones to an impressive new Apple TV, a number of notable iPad Pro tidbits and features didn’t manage to make it into Apple’s presentation.

Not to worry, we’ve compiled a number of details about the iPad Pro that you may find of interest.

Traditionally speaking, Apple isn’t all that generous when it comes to RAM. Case in point: it wasn’t until the iPhone 6s that Apple finally decided to include 2GB of RAM. Even the Samsung Galaxy S4, which was released more than two years ago, came with 2GB of RAM.

But with the iPad Pro, Apple thankfully decided to up the ante and grace it with an impressive 4GB of RAM, a full 2GB more than what comes with the iPad Air 2. The 4GB tidbit was initially leaked by an Adobe press release which read in part, “iPad Pro is great for creative workflows with a high res 12.9″ touch screen display at 2732 x 2048 pixels, A9X chip, and 4GB RAM.”

While all mention of RAM has since been removed from the press release, the well-connected John Gruber of Daring Fireball noted the following last week: “If we were to wager on the amount of RAM in iPad Pro, my bet would be 4 GB. And I would wager very heavily.”

And over the weekend, Twitter user Hamza Sood confirmed it with 100% certainty. Though positioned as a key selling point on the new iPhone 6s models, 3D touch will not be finding its way into the iPad Pro, or any 2015 iPad models for that matter. The Apple Pencil, though, does come equipped with its own sensors to detect how much pressure is being applied when a user is writing or drawing.

Weighing in at 1.57 pounds, many of the initial hands-on reviews we’ve seen thus far have commented on how light the iPad Pro feels. Engadget, for instance, said that the device “feels lighter than it looks” while The Verge’s hands-on review similarly noted that it was “remarkably light” for a device its size.

For some context, the iPad Pro is just 32 grams heavier than the original iPad.

4. The Apple Pencil has great battery life and can be charged via the iPad Pro itself

5. The display becomes more sensitive when it detects an Apple Pencil being used

Apple’s website notes that the iPad Pro can quickly and accurately detect when a finger is being used on the display as opposed to the Apple Pencil. When the iPad Pro senses an Apple Pencil being used, Apple writes that “the subsystem scans its signal at an astounding 240 times per second, giving it twice the data points it normally collects with your finger.” All of this technical wizardry ultimately results in practically no lag. Boasting of this, Apple writes that the latency is imperceptible.

6. The Apple Pencil must be paired with a specific iPad

You can’t just pick up any ole’ Apple Pencil and get to work on an iPad Pro. For everything to work seamlessly, you’ll have to first pair it to a specific device.

7. The Apple Pencil is iPad Pro only

Because the tip of the Apple Pencil is not capacitive, it won’t work in any capacity on the iPhone or non-pro iPad models.

Recommend: if you would like to transfer from old iPad or iPhone 4/5/6 to new the iPad mini 4/iPad Pro/iPhone 6s/Plus, you can try this perfect one click data transfer tool, migrate everything, including SMS, Contacts, Videos, Photos, Call logs and more from phone to phone. Simply download and have a try.