6 ways to clear out space on your smartphone

Smartphone storage is at a real premium unless you’re lucky enough to own one with lots of it. (And if you do, your phone likely wasn’t cheap.)

With all the apps and music you download, and photos and videos you capture, there’s probably a good chance your smartphone is bumping up against its storage limit. Those with 16GB smartphones or (gasp) 8GB smartphones have it the worst. It’s especially tough if you’re a 16GB iPhone user since iPhones don’t have memory card slots for storage expansion.

Kind of like cleaning your room, clearing out the clutter in your phone is a must if you want to make room for new stuff. It may feel like a daunting task, but a lot of it actually doesn’t take that long. Here are the best ways to clear out space on your Android or iPhone.

Your photos app is a treasure trove of memories. I know all about it (I own a 128GB iPhone 6 and 53.9GB of that is hogged up by photos and videos).

It’s not a fun job and it’ll take a while if — like me — you have a lot of photos and videos to look through, but clearing out the old ones will make room for new ones. Start at the beginning and comb for duplicates — delete the blurry pics, old screenshots, and select that one good pic from the group of burst-shot photos.

When you’re done sifting through the pics, go ahead and delete any old videos and movies. If your phone supports it (like on iPhone), go ahead and trim video clips that are too long and shorten them where possible.

Move photos and videos to the cloud or computer

People who aren’t the type to look back at old photos and videos have it easier.

For y’all out there, you can simply back up your photos to the cloud through services like Flickr, Dropbox and Microsoft One Drive. (We highly recommend using Google Photos, which lets you store an unlimited amount of photos at up to 16 megapixels each and videos up to 1080p resolution) — for free. Transferring photos and video to a computer is also easy to do. Mac users can plug their iPhone in via USB and use iTunes, iPhoto or the new Photos app to manage their media. Mac users can also use the included Image Capture app to move photos and videos from their iPhone. After backing up locally, just delete them off your iPhone — all of them, no need to be selective.

Windows users can also use iTunes to back up their photos and videos. Transferring files manually.

Alternatively, if you own an iPhone 5 (or later) running iOS 7 (or later), you can use AirDrop to wirelessly transfer files to a Mac running OS X Yosemite (or later). 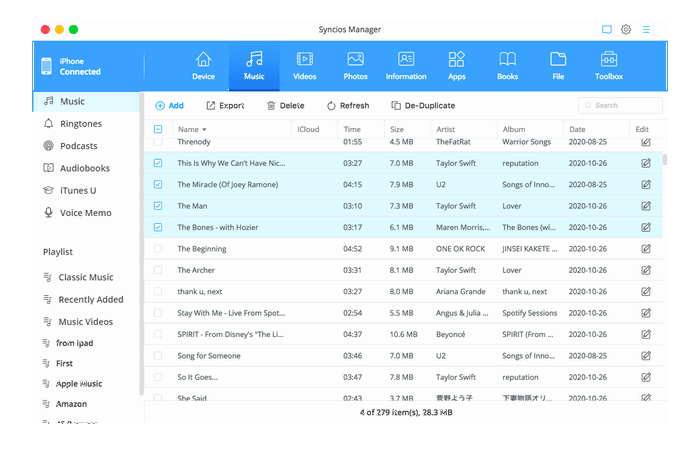 This one is a no-brainer. Apps can take up a significant amount of your phone storage. Purge any apps you haven’t used recently or don’t use very often, especially old games you no longer play.

In case you missed the memo, to delete an app on iPhone, long press on an icon and then tap the X over it.

To delete apps on Android, go into the app drawer and long press on an app, and then drag it to the “uninstall” message that shows up. Simply long-pressing on an app on the home screen and then dragging it to the “remove” only removes it from the homescreen and not entirely from the phone.

Alternatively, if you want to deleted the unused Apps on your iPhone or Android devices in bulk or selectively, Syncios iPhone Manager also does a pretty job on Windows PC or Mac,  Syncios’s support website provides step-by-step instructions here. Music is another huge storage hog. Over the last few years, streaming music and music subscription services have all but replaced downloading music and storing it locally.

The only downsides to moving to a music streaming service is you may not have offline access and, you know, paying a monthly fee for the music. Apple Music offers offline tracks, but it defeats the point of trying to clear your storage. Spotify’s premium membership also lets you save songs for offline listening, but again, it goes against the objective here. Practically every flagship Android phone and the new iPhone 6S and 6S Plus are capable of recording videos in 4K resolution. These video files are generally way larger than HD and full HD videos.

Unless you have a 4K TV or 4K computer monitor to play the videos on, chances are you don’t need to record in 4K at all. Turning 4K video recording off will save battery life, too.

By default, most smartphones don’t shoot in 4K, but if you fiddled with the setting before or aren’t sure if it’s on or not, you can dig into your camera settings to switch it off. Some phones include a file manager for moving files from the internal storage to the microSD card and vice versa. If your Android phone doesn’t have a file manager, we recommend downloading ES File Manager (free) or File Manger (free).

iPhones users are out of luck here since they don’t have microSD card slots.