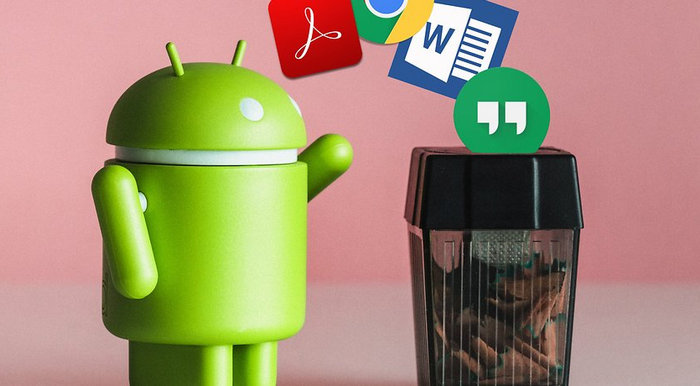 Smartphones quickly become consumed by unnecessary apps that not only take up storage space, but can also affect your handset’s performance and battery life. Well, enough is enough – it’s time to clean up your smartphone. Here are five types of apps you should remove immediately. Whether it is by killing your battery life, using too much mobile data or shoving ads in your face: apps can be annoying in many ways. Sometimes we end up with too many apps on our phones, and the time arrives to tidy up. Delete these apps today and enjoy your smartphone more.

1. Apps that claim to save RAM

Apps running in the background eat up your RAM and use battery life, even if they’re on standby. The idea behind apps that claim to boost your memory is to close these background apps systematically. Unfortunately, this exacerbates the problem.

Apps running in the background have to restart after you close them. Memory and battery life is used to restart the apps, and this constant closing and restarting of apps can make your phone unstable. So, these memory saving apps don’t make any sense. Furthermore, Android manages RAM usage automatically and knows when to run an app or not, so third party apps aren’t necessary.

Cleaning apps promise to clean up your phone to boost performance. While it’s true that deleted applications sometimes leave behind some cached data, it’s not necessary to download a dedicated cleaner. Just go to Settings > Storage > and tap Cached data. At the Clear cached data prompt, hit OK.

Alternatively, you can clear the cache of individual apps by going to Settings > Apps > Downloaded and tapping on an app. On the next page, tap Clear Cache.

3. So-called antivirus apps are unnecessary for most

Your Android device and the Play Store can already do everything that antivirus apps can. For theft protection, Android Device Manager works securely without an additional app. And whether an app is actually hiding malware, Google checks with the Play Store automatically.

So-called Android antivirus apps are only useful if you are often downloading and installing APK files found outside the Play Store. Then, anti-malware apps can examine these apps during installation and offer warnings before you open them. However, you can’t disinfect your smartphone. The best method to do this is – ironically – without an app.

To really increase battery life, you have to reduce energy demand from the operating system and all running services and apps. So to be effective, energy-saving apps would need to take control of running Android. But since Android doesn’t can’t be controlled without root privileges, apps available in the Play Store can’t simply step in and take control. At best, apps can advise or warn you when you’re chewing through too many Energon cubes, but that’s about it. If it closes power-hungry apps, those apps will likely automatically reopen anyway. Thus, the effect is reversed and energy consumption could actually increase.

The alternative? Open your Battery settings. Find the app with the highest consumption in the list and forcing close it. Some app errors can also be resolved this way, which might have caused increased energy demand to begin with.

Many smartphones have a lot of apps pre-installed. Whether it’s apps for hotel booking, games, or functionally questionable office apps: many manufacturers install their own useless apps alongside the compulsory set of apps from Google. Ideally, it’s just storage space wasted, but in the worst case, they take up battery life, screen real estate and can’t even be uninstalled.

It is therefore worthwhile to look through your app list and delete the pre-installed apps. The easiest way to do this is by grabbing the respective app in the app drawer and then pulling it onto the app info icon. Then you will see if the app is uninstallable or only deactivatable. The latter option simply means the app is no longer launched upon restart and disappears from the app drawer, but it continues to occupy space anyway – these deactivated apps can only be completely removed after rooting your phone.

Some vendors won’t let you uninstall Facebook, Twitter, or other social networks on your smartphone. This is annoying for users who don’t care about social media, or those who don’t need the app taking up space on their device. After all, in many cases, the mobile site is sufficient enough.

Remedy is to buy smartphones from manufacturers which allow the uninstallation of bloatware – for example, Huawei and Honor. Or buy smartphones which only come with a few third-party apps, like Google or Lenovo.

Read also: How to Clean up Your Android Device and “Other” Storage?